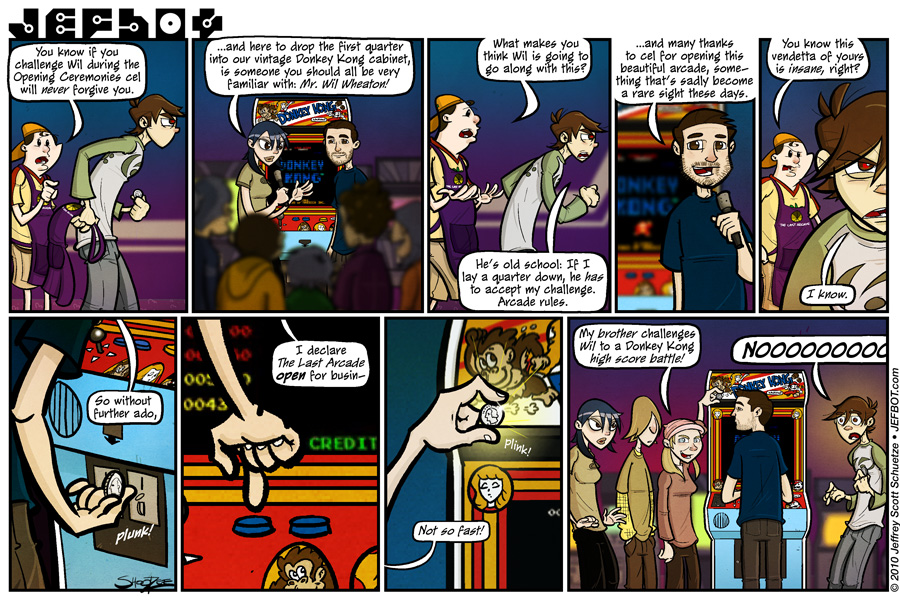 Woo-hoo! After a two-week hiatus due to my recent move to a new apartment, the JEFbot strip is back and ready to begin the final act of The Last Arcade storyline! If you’ve forgotten who the girl in pink is and why she seems intent on ruining this moment for cel, check this strip out, or start from the beginning of the story arc here.

And I’d like to take this opportunity to give a huge, monster thanks to the readership for being so absolutely, unreservedly awesome while I was away. A hiatus can be disastrous to the readership of some webcomics – I’ve seen it happen – but in this case it seems probable that not only has the readership maintained its numbers and enthusiasm, but the JEFbot community has actually increased during my absence! As soon as I think I’ve gotten this whole webcomics thing figured out to some extent, you guys always end up surprising me, and I love you for that.

Anyway, I can’t tell you how great it feels to be at the drawing board (or drawing tablet, in this case), sketching jefbot, the Cornfather and cel again. I still have a lot of unpacking to do, but now that I have my computer set up, I can continue to unpack and organize my new place while working on the strip. Hopefully, this will mean no more interruptions for quite some time, but it’s extremely comforting to know that, judging by this last break, this webcomic will still have an audience should something come up. And while I’ve tried to keep involved with the comments (thanks again to those that have helped me out with this – you know who you are), I’ve really missed talking with you all after a new strip has gone up, so that’s one of the things I’m most looking forward to now that the strip’s running again.

It’s now 3:30am. I’ll no doubt be a zombie at work tomorrow from lack of sleep, my arm’s sore from drawing for eight hours straight and I have a headache from forgetting to eat while I was working on the strip. It’s great to be back!