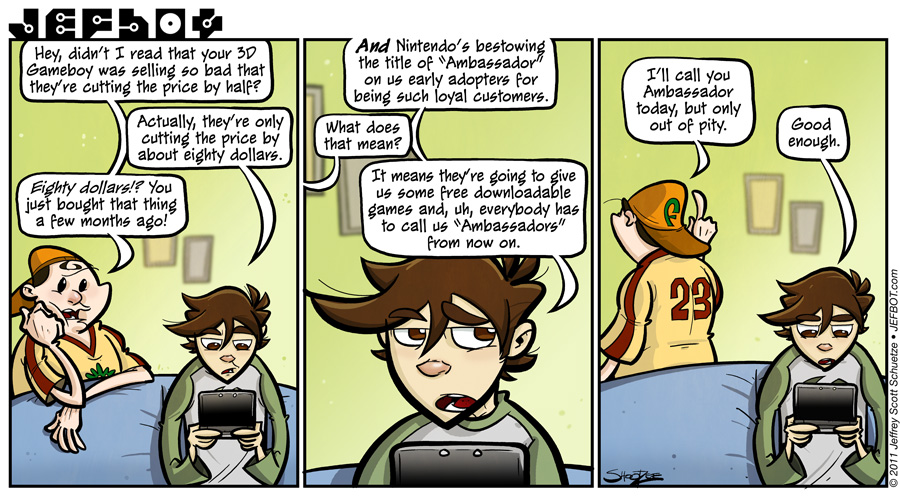 This isn’t the first time jefbot’s been punished for early adopting (see JEFBOT.44) and it certainly won’t be the last. It’s the dilemma of many a videogame, DVD/Blu-ray, console, computer, tech and gadget buyer (read: geek) that whatever you buy is most often going to depreciate in value as soon as you buy it. In this case, with the 3DS, Nintendo slashed its price way faster than any console (handheld or otherwise) I’ve ever seen. Sales haven’t been great, but I’m surprised at just how panicked the company seems. I suppose they’re trying to get a jump on the install base before the Playstation Vita comes out later this year. To be fair, Nintendo’s giving 20 free games to their “Ambassadors” that bought the 3DS system early, and many of the games are ones I covet, which lessens the sting a bit. Also, the social aspects of the system have pretty much paid for the console itself, as I’ve gotten many new eyes to the JEFbot site and bodies to the JEFbot booth, most recently at the Phoenix ComiCon, with the 3DS’s StreetPass function, which lets me pimp the site out to other, nearby 3DS users, so it’s not like I’d get in my DeLorean and go back in time to not buy the system if I had the chance to do so. I like the system, and while it could use some more AAA titles, it looks like many will be coming before the 2011 Holiday season, which is fine with me since I don’t have much time to play much right now. Heck, before the 3D remake of Ocarina of Time came out, the game I played most on my 3DS was last generation’s Pokémon White.

So, if you’re on the fence about buying a 3DS, I’d wait for the price drop in a couple of weeks (unless you’re interested in the 20 free games). Yeah, the 3D is a bit gimmicky, but like most uses of 3D technology, it can sometimes be put to good use (like in the aforementioned Zelda game) and you can always turn off the 3D if you don’t like it and play in 2D instead. With 3DS updates of games like Mario Kart, Super Mario Bros., Luigi’s Mansion and Kid Icarus – not to mention the inevitable 3DS Pokémon – coming out, I’m sure this little system is down but not quite out, yet.

Oh, another cool thing is linking with JEFbot readers via Friend Codes, and I’ve met a bunch of you via this system. Here’s mine  for those who didn’t see it before, or who have recently gotten a 3DS. After you put my friend code in, email me yours and I’ll add it to my console: