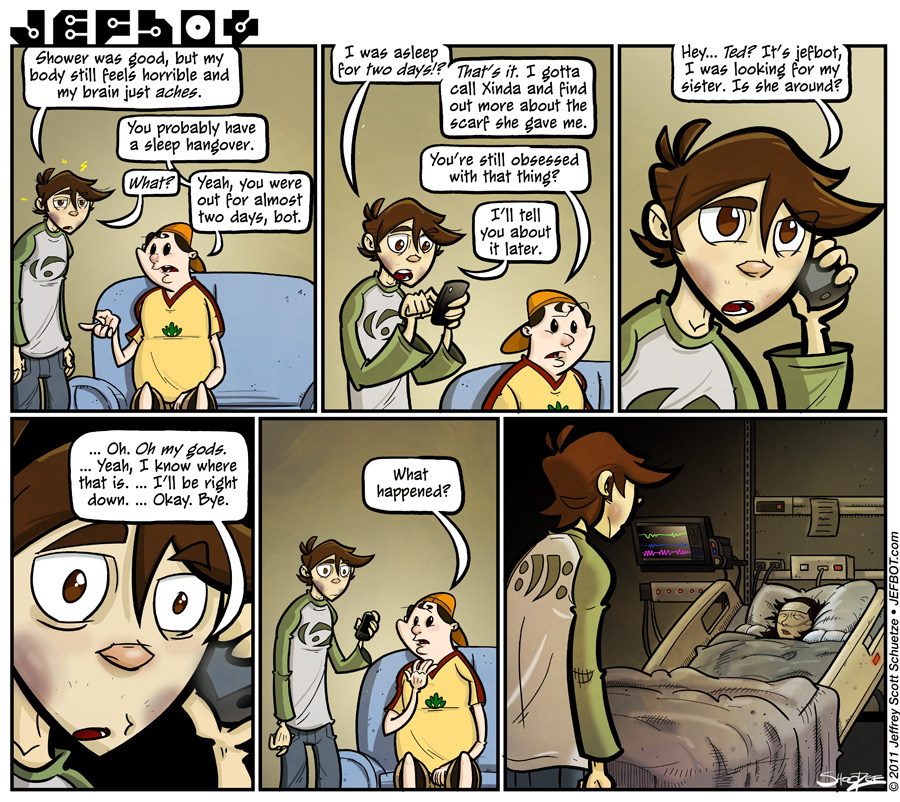 My sister, Linda (the inspiration for Xinda, of course), was diagnosed and operated on for breast cancer earlier this year. I’ve been struggling with whether to incorporate her condition into the continuity of JEFbot or not for a long time, but after talking it over with Linda and other family members and friends, I decided to go forward with it, as the consensus was that her story might raise awareness of the issue (October is Breast Cancer Awareness Month after all) and also possibly give comfort to those that have either been through it themselves, or know loved ones who have. This storyline – actually, it’s not really a storyline, as it will be an ongoing challenge for Xinda in future strips for as long as it’s a challenge for Linda – won’t always be funny, but I’ll try to find the humor in it whenever possible, just as my sister has.

Although the cancer was removed at a late stage, the good news is that Linda has just recently completed her chemotherapy and radiation treatments and is doing well. (I don’t think I would’ve been able to make these strips otherwise, honestly.) I’ll let her disclose as much of the specifics of the operation and treatment as she’s comfortable with, and knowing her, I’ll bet nothing is off limits if you have any questions, which you can post in the comments. She’ll either answer them herself or I’ll pass them along.

Here’s a pic of Linda at the hospital after the surgery that sums up her attitude towards the cancer perfectly:

And here’s one of the two of us celebrating Linda’s birthday at the Grove in West Hollywood a week ago:

A quick note that this is the last strip in The Angry Scarf storyline, which means this is the end of the three strips a week schedule! The next new strip will be on Friday, so next week will begin our regular schedule of new strips being released every Tuesday and Friday.

Also, if you’re in L.A. this weekend (November 5 & 6) come to the JEFbot booth (#3601) at the Comikaze Expo at the Los Angeles Convention Center. If all goes well, Xinda (and/or possibly Mombot, Popbot and Lor), will be helping me out at the booth throughout the weekend!