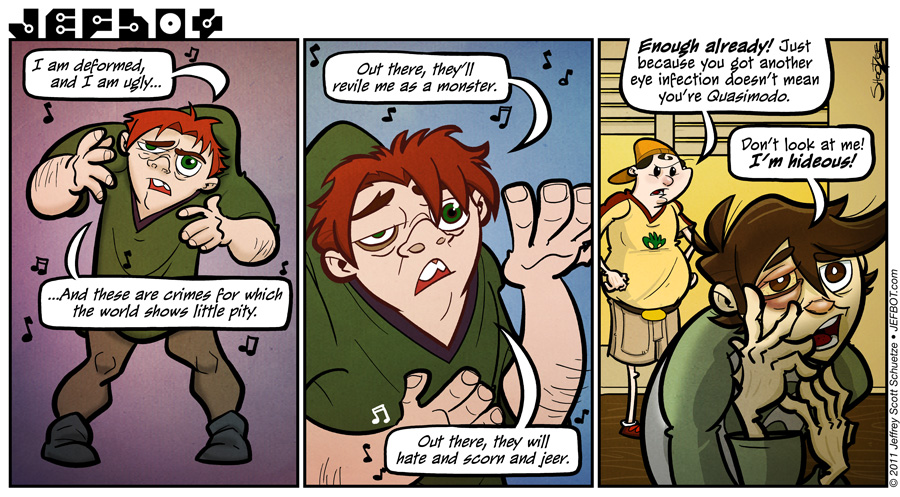 I’ll keep this short since I’m trying to give my nasty, infected eye a break from staring at computer screens for too long, and it’s already starting to feel a bit itchy at this late hour. Good news is that the eye’s doing a lot better, and isn’t nearly as red or puffy as it was a few days ago, so thanks for all the well wishes! As always, you guys rock.

About the strip: When my eye started swelling, it was impossible for me not to break into a few of Quasimodo’s songs from Disney’s 1996 animated film, The Hunchback of Notre Dame, which I’m a huge fan of. It’s one of my favorites of the old, new wave of Disney Musical flicks that started with The Little Mermaid, as it has some touching, beautiful songs, a fantastic score and a story about religion and acceptance that still resonates. It also has some incredible animated sequences and great characters (love Judge Claude Frollo), even if the gargoyles adding “comic relief” at the most inappropriate times threaten to ruin the entire movie. If I had the time, I’d make one of those fan edits (like the Jar Jar Binks-less version of Episode I) and just remove the gargoyles and most of the silly humor altogether; I think that would make a great film even better.

Anyway, this strip gave me an opportunity to draw Quasimodo, and an excuse to tell you that if you haven’t seen the film, to go check it out. Interested to see what you guys think of Hunchback, as I know it wasn’t one of Disney’s more popular films, and I don’t have many friends who hold it in as high regard as I do. Still, I can’t wait for this one to come out on Blu-ray.