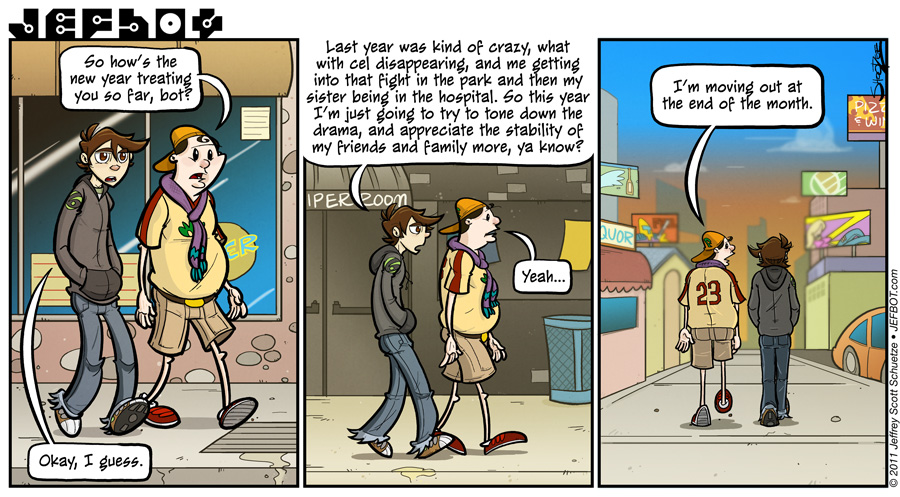 First off, SO sorry about the lack of a Tuesday post this week. I’ve been pulling my hair out over this downtime and am taking steps to ensure this issue never happens again. Basically, the hosting site changed the passwords for my FTP site so I couldn’t upload the strip, and I wasn’t notified until yesterday. After that, it still took another day to resolve the issue and get my new password set. Really frustrating. Anyway, the issue’s resolved, so I’m going to try and let it go while I still have hair left to pull. Moving on:

There are a couple of big things going on with today’s JEFbot, so let’s get to it!

First off, the Cornfather isn’t being written out of the strip (so you CornFans can put down the torches!) but it’s true that he might be moving out of the apartment he and bot have been sharing for the past few years. I’ve actually been meaning to do this for a while now; although the strip doesn’t directly reflect my life 100%, (heck, if 1% of the comic’s truly autobiographical, I’m in trouble!) I do like to bring some of what happens in the “Real World” into jefbot’s world, and the thing of it is, is that Michael Cornacchia (the Cornfather’s inspiration) and I haven’t lived together in over a year. Of course, we still talk and hang out, but it’s a totally different dynamic now, and I’d like to reflect that in the comic. Rest assured, he’ll still be playing a role in jefbot’s adventures, and there’s still much comedy, mayhem and drama to be had from him, but things will change.

Secondly, this strip marks the end of “Chapter 2” in this comic strip! The first chapter – as represented in Volume 1 of the JEFbot book which I hope to have available to you all soon! – collected strips 1 – 203, and set up the world and characters of the comic. The second chapter includes strips 204 – 408, and expands the world and things get crazier. In the next chapter, I’m hoping to expand the world even more, and I’ll tell you now: things are going to get downright insane, so hold onto your butts! The next several strips will be relatively tame as the Cornfather starts moving out of the apartment, but soon after that, get ready for things in jefbot’s life to get shaken up, big time. I hope you’re all along for the ride!