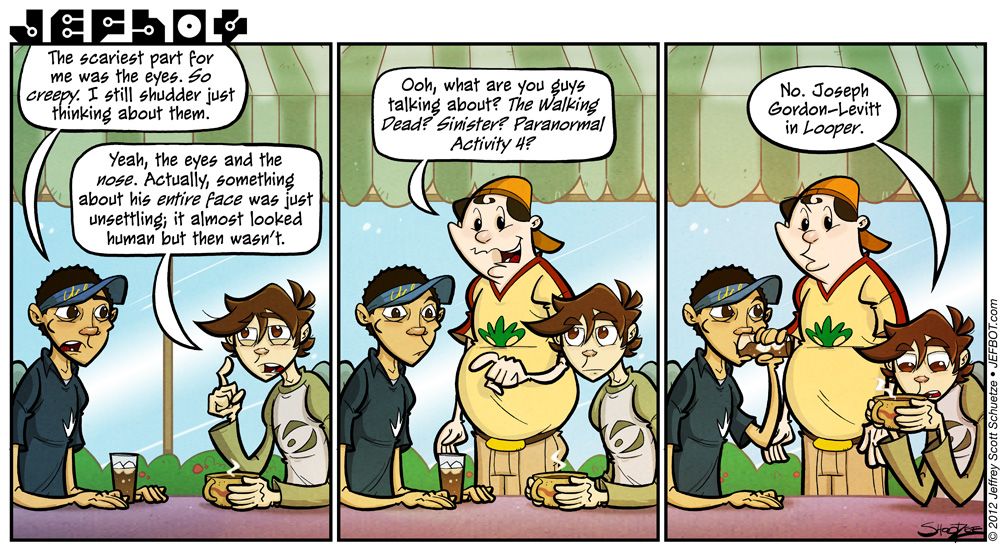 SPOILER WARNING: I’ll be talking about a few of the story elements from the film, Looper, below. Nothing that hasn’t already been revealed in the trailers, mind you, but if you want to go into the movie completely untainted, read no further.

First off, let me say that I thought Joseph Gordon-Levitt did a great job playing the younger Bruce Willis. He brought just the right amount of Willis’s mannerisms and expressions peppered with the right cadence of voice and delivery of lines that gave the impression of Willis without just doing a full-on mimic of him. But why did they have to try and make Joseph physically look like Bruce Willis with prosthetics and make-up? Seriously, every time he came on screen I’d be taken out of the movie, since my brain was trying to process his Looper mutant face with the big, dark eyebrows, too-blue contacts, a painted-on five o’clock shadow and a nose that didn’t quite belong there. It was almost like watching someone wearing a JG-L Halloween mask, or a videogame character that hadn’t quite crossed the uncanny valley, or a villain from the Dick Tracy movie. Okay, maybe not that bad – a few of my friends didn’t have much of a problem with Joseph’s face, or got over it after an hour or so into the movie – but I thought it looked bizarre and distracting the entire time. And since his performance was so good, why even change his face in the first place? If we can buy rocket-motorcycles, telekinetic abilities and time travel, I think we’ll buy JG-L as a young Bruce Willis.

Go see Looper. It’s good. There were some things that bothered me, mostly with the time travel stuff, but it was entertaining and the acting was good. Probably the best thing I’ve seen Bruce Willis do in years, actually. Just why did they have to tinker with Joseph Gordon-Levitt’s face? Let me know if I’m off base here. The human brain’s wired to recognize faces, and I realize my brain could be a bit overly-sensitive when it comes to this stuff, as I’m always processing how to draw people and this made that difficult.