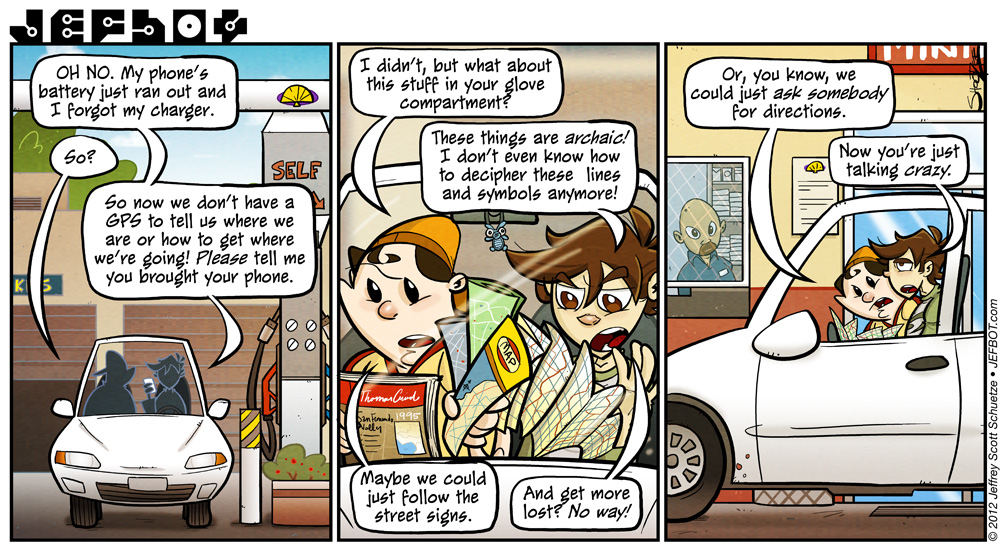 As far as my reliance on getting maps and directions from my cell phone goes, I’m nearly as bad as jefbot is in today’s strip. When I first started driving, I had a Thomas Guide my dad gave me that I used to find my way around L.A. on various errands and acting auditions. By the time I had access to digital maps, that guide was barely recognizable as a collection of counties, roads and highways due to the car fluids, fast food stains and general usage it had endured. I still have it in the trunk of the latest BOTmobile, but it’s been years since I’ve cracked it’s oily, torn cover. Whether I could figure out how to use it again is a different matter; its index and legends were cryptic to begin with. Anyway, by the time I was fluent in MapQuest and later, Google Maps, it was nearly time to make the jump to GPS devices and then smartphones. Now that I can get to a destination by literally asking my smartphone, and then following its audible directions, I don’t think I could ever go back.

Do any of you BOTreaders still use paper maps? Or do you rely on online maps? GPS? Map apps? The Force?

Did I mention that a limited edition, holiday BOTton will be given FREE with all orders from the new BOTshop from now ’til December 31st? Check out the news, here.