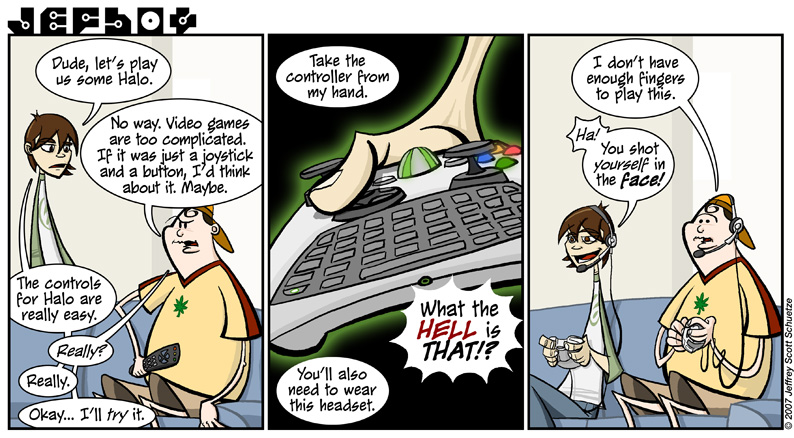 This comic came about when I saw the new XBOX 360 Messenger Kit, and how it made the already multi-buttoned, complex XBOX controller even more so. One of the reasons the Wii is doing so well is because people aren’t scared off by its input device, namely, the Wii Remote. It has few buttons and its motion sensing technology is fairly user friendly. Nintendo actually designed the controller to resemble a TV remote so as not to scare off any potential players like moms and grandparents. Microsoft however, doesn’t seem to mind scaring off anyone outside their “hardcore” demographic – indeed, when I first saw the snap-on keypad online, I knew I had to have it – and so the Messenger Kit was born. Having the device snapped onto my controller elicits much stares and questions when friends come over. I don’t really message much on XBOX Live anyway, so have hardly ever even used the device, but you know, if they ever bring a good MMO to the 360 (or a script writing program, I suppose), I’m prepared.

Here’s the device in the wild. As you can see, I didn’t have to use much artistic license to show what a beast this thing is.