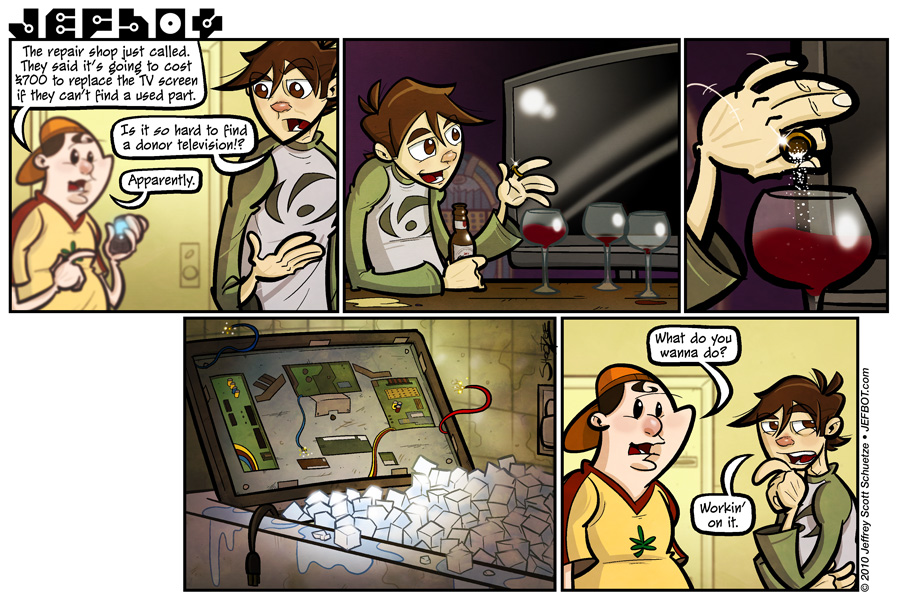 Do you know where your TV is?

So the message that the Cornfather relayed to jefbot in the strip is completely true – the repair shop I took my Sony Bravia to wanted to charge me $700 for a new screen from Sony! I don’t even think the TV is worth that much anymore. In fact, I spent less than that amount getting a new HDTV recently, which is bigger and better than the one I was having repaired. And when I told the repair guy not to bother, he was incredulous that I would want to come by to pick up the broken TV. No doubt he was going to harvest it for parts to repair other monitors, and maybe that would’ve been okay, but it is my dad’s Bravia after all, and I don’t remember him giving me a donor card when he lent it to me.

And yes, the first chapter of jefbot’s dream-manipulation saga is complete, but we’ll come back to that storyline in the future. It felt like a good place to push pause and get back to jefbot’s television dilemma, which has recently been resolved in my own life. Yes, I’ve been reunited with my DVR and videogame consoles, and it feels so good.