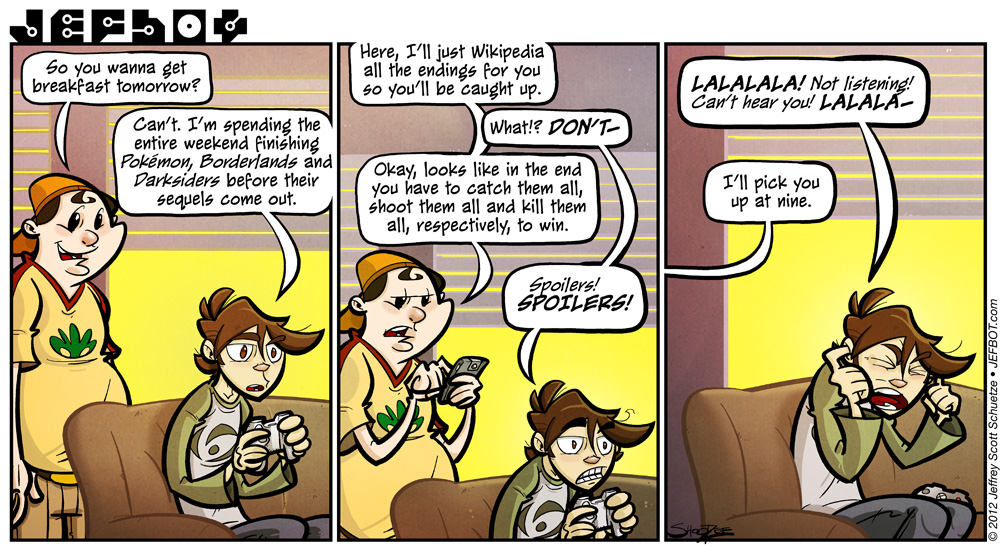 I’ve been so behind on my video game playing lately that, just as jefbot in today’s strip, I’ve been trying to catch up on a bunch of games before their sequels come out. But how important is it that I do this for the sake of “story”? While I’ve been enjoying the world of Borderlands, am I going to be lost if I don’t find out how things wrapped up trying to find The Vault before playing Borderlands 2? While I haven’t finished Darksiders, I’m pretty much sure I’ve been spoiled on the ending just from the scant marketing materials I’ve seen promoting Darksiders II. And while I’ve been enjoying the surprisingly dark storyline (for a Pokémon game anyway) for Pokémon: White will I seriously be lost if I don’t finish before Pokemon Black & White 2 comes out in a few weeks? Probably not. While there are a few games, like the Mass Effect series and Bioshock where I’ve been completely engrossed in the story, most games have a simple narrative, mostly just to get you from point A to point B. Heck, most of Nintendo’s franchises have kept the same storylines and character motivations since the early ’80s! But will I finish rescuing Princess Peach for the zillionth time in the first New Super Mario Bros. before getting New Super Mario Bros. 2, which was released a week or two ago? Of course. But I think that has more to do with me having some sort of obsessive completionist streak than anything having to do with story.