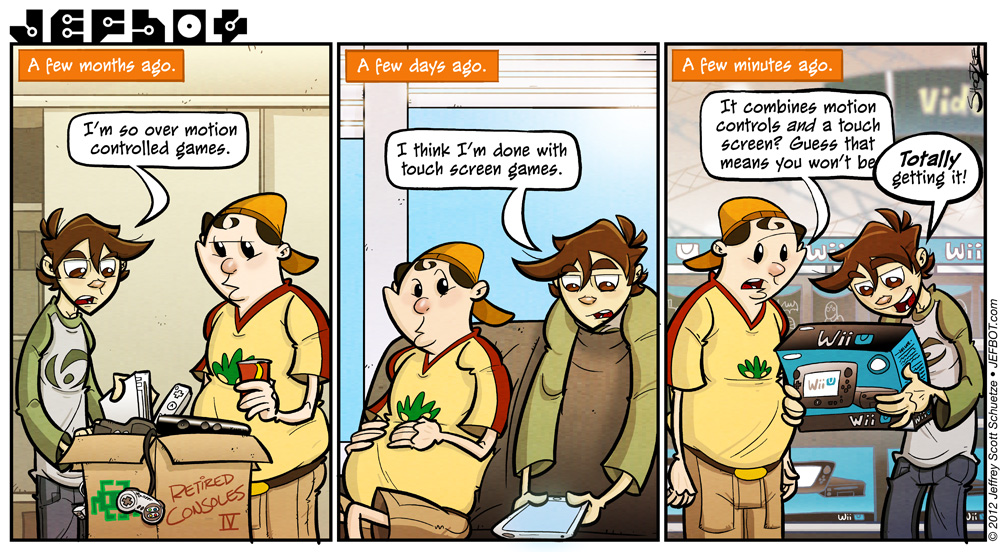 I’ve been pretty happy with the new Wii U console so far, but not as a game machine – it’s pretty much my go-to device for watching Netflix, Hulu and Amazon Prime videos now, even with a somewhat clunky and slow user interface. While the pack-in game, NintendoLand, is fun with friends and it’s cool seeing Mario in high-def in New Super Mario Bros. U, there hasn’t been anything that’s wowed me the way Wii Sports did back when the original Wii came out. I’ve heard ZombiU is worth checking out, so that might make it to my Christmas Wish List, and I’m intrigued by the whole Skylanders phenomenon, so could possibly get the starter set for that, but most of the other launch titles are available on the XBOX 360 and PS3, so I’ll probably keep getting cross platform games for those consoles until I hear that they’re better for the Wii U, something that hasn’t happened yet. Am I sorry I bought the console? Of course not. We all know the reason for buying Nintendo consoles: to play Nintendo games on it! And as soon as Zelda U, Metroid U, Mario Galaxy U, Pokémon U, Pikmin U, Starfox U, Smash Bros. U, Animal Crossing U, etc. are released, any reservations I have about the console will at least be temporarily put to rest.

As for the touchscreen/motion control gaming? Not as annoying as I would’ve thought. I’ve found that – at least on the games I’ve played so far – the use of the motion controls is much more downplayed than with the original Wii, and the use of the touchscreen is (so far) pretty novel and creative. It’s kind of like playing with a huge DS, where your TV’s the top screen and the touchscreen/controller is the bottom screen. Pretty cool. But my favorite use of the second screen is (again) when watching videos – where info like the director/actors/year of release/synopsis is always available on the GamePad, so I don’t have to pause the video on the big screen while I look for that kind of info. Again, not a glowing endorsement for the gaming side of the machine, but a cool feature nonetheless.

So how ’bout you BOTreaders? Do you have or plan to get a Wii U? Going to wait for the next XBOX or Playstation? Or happy with what you have and aren’t really interested in the next consoles just yet?