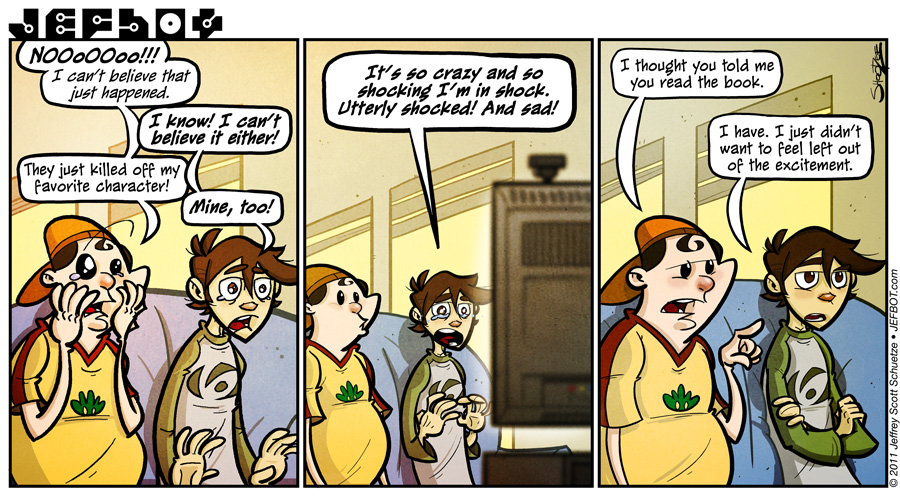 I won’t spoil anything for those who are currently watching the TV show, Game of Thrones, (or reading the book it was based on) but many of you may have heard about the grim turn of events that happened towards the end of the first season that left some viewers  feeling dismayed, betrayed and yes, shocked. Some were even threatening to cancel (spoilers at that link) their HBO subscriptions over the kerfuffle. Today’s strip documents exactly how I reacted – or rather, how I wanted to react when this episode aired. It was such an inspired, tense, unexpected, “there’s no way they’ll do this” TV Event, that I wished I hadn’t read the book so I could’ve experienced that “surprise” as it happened. In fact, even as the episode was on approach, I was anxiously willing myself to forget whole chapters from the book but to no avail. Yes, it was shocking when I read it in the book, too, but the scene was so unexpected – especially considering what we’re used to in the Fantasy genre, and even more so on television – that I think there might have been more impact upon seeing it, rather than reading it. A truly rare occurrence, which speaks to the quality of the HBO series.

Don’t post any specific spoilers about the Game of Thrones series or novel in the comments, por favor. The HBO series and the A Song of Ice and Fire novels are pretty special and I wouldn’t want them ruined.