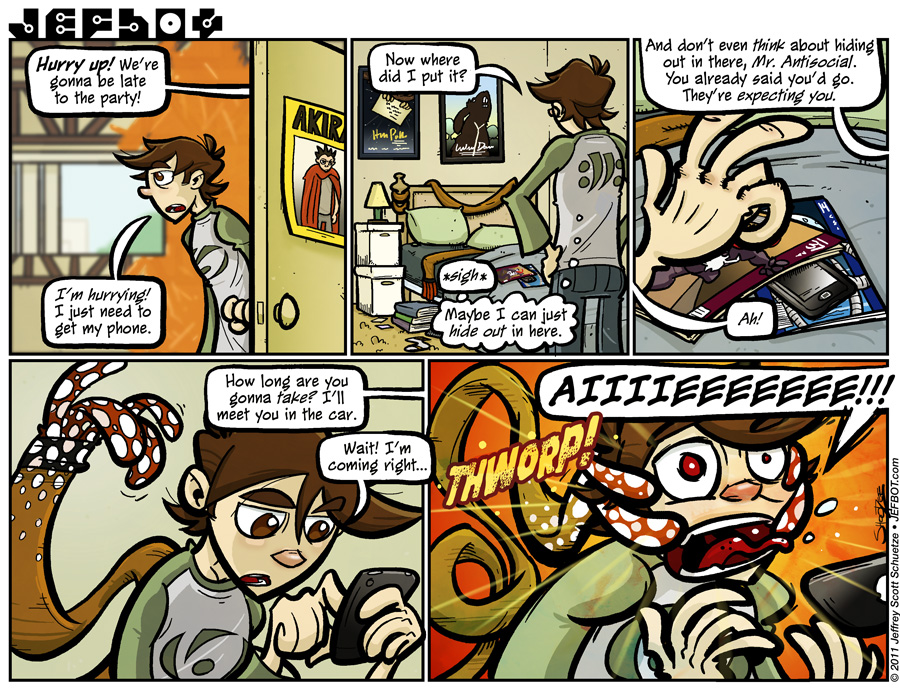 Nope, it’s not a dream, the Angry Scarf has become sentient and attacked jefbot! AIEEEEE!!! This story has been a long time coming, as the origins of the scarf go way back to the second JEFbot strip from 2007, when Warrior Sister Xinda gave it to jefbot as a gift. This strip is the start of a major storyline, and I have a lot of exciting stuff planned for it that will, yes, change the very fabric (heh. couldn’t resist) of the JEFbot Universe FOREVER!!! Or, at the very least, there will be some fun scarf action. Hope you come along for the ride on this EPIC YARN! (Again, couldn’t resist. Sorry.)

If you’re new to the strip, or need a refresher course on the scarf’s strange past, tab these strips out:
• The Angry Scarf
• Origin Story
• It Lives

And speaking of origins, tomorrow, August 6th, will mark the 4 Year Anniversary of JEFbot! ALSO… you might just want to check in on Monday, as I’m contemplating going to three strips a week (MWF) for the rest of this anniversary month! It’s not set in stone, so I’ll confirm or deny that later. Stay tuned!