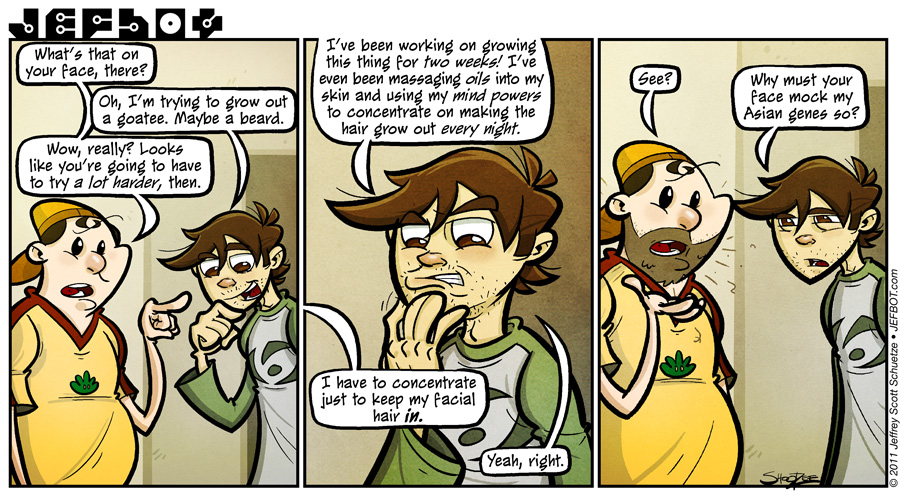 My face sucks at growing hair. There, I’ve said it. I could probably grow a decent mustache in about a month, but hair growing outside my chin and upper lip area is patchy and sporadic, so we’re safe from me ever sporting a full hipster beard. (Which I’d probably do if able because beards are cool. But you rarely see Asians with ’em – even demi-Asians, like myself.) I normally have a goatee (beard on the chin) whenever I’m not auditioning (so that’s much of the time) to spare myself from shaving as often, but I’ve occasionally grown out the full Van Dyke (mustache connected to chin beard) which takes more effort since I have bare patches where my mustache doesn’t quite connect with my goatee, which means I have to encourage a little extra overgrowth on the top half to cover those naked flesh spots up. It’s been years since I’ve actually had that much hair on my face, but I’m working on that kind of thing now, in a noncommittal sort of way. I’m about a week and a half in, though you’d never know it. If this mini chin tribble (ah, if only. Sadly, this one doesn’t multiply as quickly, if at all) lasts beyond this week before getting the (electric) razor, I’ll be as surprised as anyone.

Anyway, enough talk about my face hair; it’s kind of grossing me out.