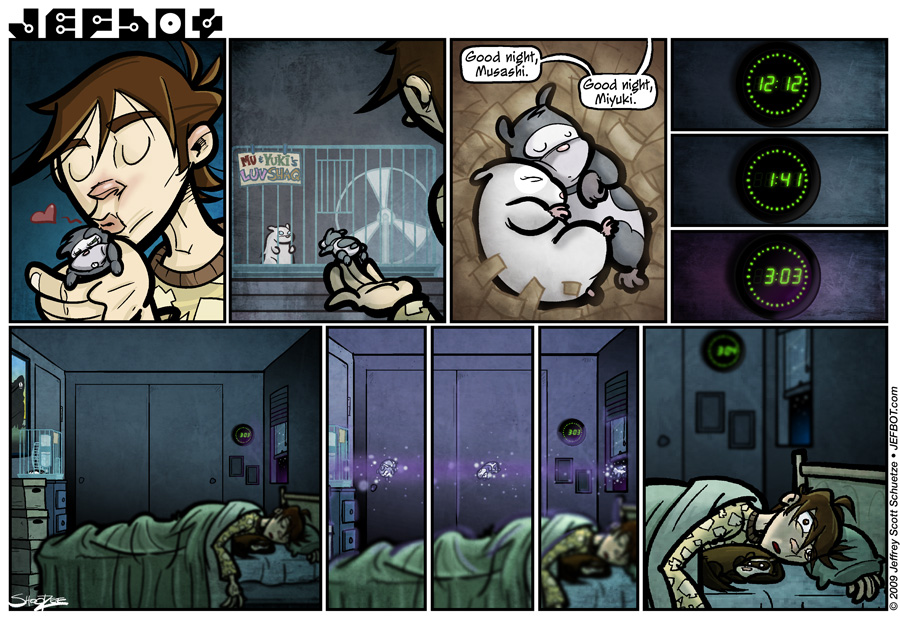 I’ve told you since the beginning of this storyline that things were going to get weird by the end. And so it goes: just when things seemed to be settling down as far as the aliens were concerned, they up and abduct our favorite little hamster. However, no need to worry, Musashi fans – this isn’t the end of his story, it’s really just the beginning.

This strip (or something very much like it) has been in my head since I introduced Musashi and Miyuki way back in JEFBOT.28_Hamster God. Yeah, they looked a little different back then, but I knew that one day (should the strip go on long enough) the events in this very strip would eventually occur. Well, today’s the day, and I’m excited to finally get this strip out of my head and onto your screens via the web. Although nothing will change with JEFbot immediately, Musashi’s abduction is one of the milestones I’ve been waiting to get to, and it’ll have wide-ranging effects on the JEFbot Universe at a later date.

Thanks for indulging me with this storyline (the longest one, yet!). It was a lot of fun to write and draw and I can’t wait for you guys to see where it all leads. If you’re experiencing storyline fatigue though, no worries – we’ll be getting back into some more lighthearted fare for the rest of the year before hitting the next storyline, in 2010. See you Friday!