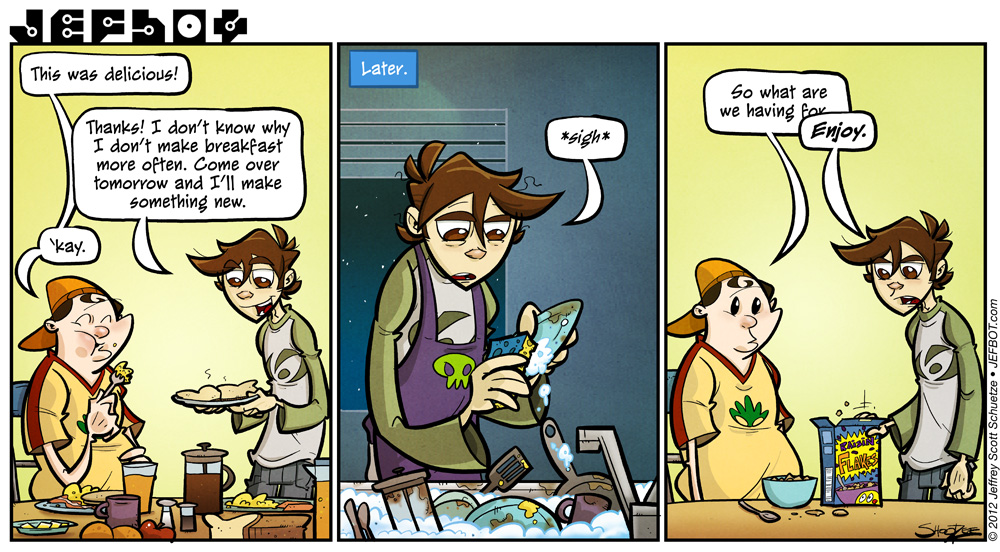 You know, that first couple weeks of being at home after my outsourcing was good times. I treated myself to homemade bacon and eggs, pancakes, fresh coffee, english muffins and fruit – sometimes all at once. Since then, I generally don’t indulge myself quite so much, for the reason portrayed in today’s comic. Specifically, treating oneself is just too much of a hassle with all the cleaning up that’s involved. While I’ll still crack an egg or fry up some spam, I generally try and do that stuff with limited utensils and in as short a time span as possible. I’ve extolled the virtues of cereal before, but it really is a miracle food.

So sound off in the comments!: what’s your favorite cereal? That Princess Leia poll was pretty fun, so I might just take the top 10 cereals listed in the comments and put them to a new poll. My faves are Post Raisin Bran, Quaker granola and – while I don’t really dig the sugary stuff as much, I do like Frosted Flakes and Cinnamon Toast Crunch when I want to mix in something sweet. Your picks?