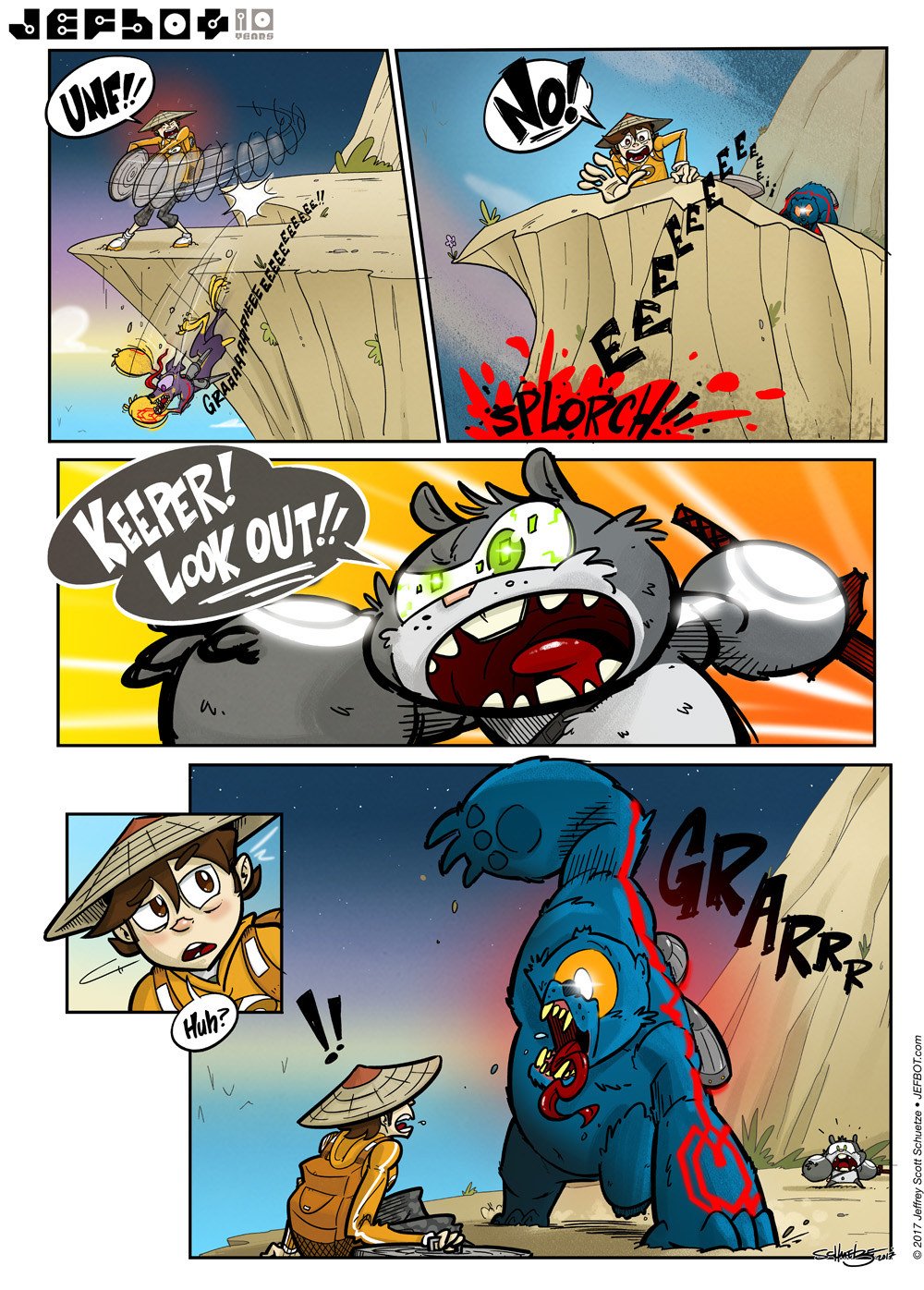 As big of an animal lover as I am, I’m pretty sure I would’ve done the same thing (hauled the killer dog over the cliff) had I been in bot’s shoes. And although I’m sure bot’s gonna be feeling pretty conflicted about this for a long time to come, I’m sure Mu won’t be shedding any tears over it. Of course, deflecting a mutant doberman and deflecting a giant, angry, mutant, cyber, bear paw are different things entirely, so you’ll just have to stay tuned to see how (or if!?) bot gets out of this one!

Just wanted to let you BOTpeeps know that the next strip might not be posted ’til October since I just booked two new jobs (animating another Glamour : My First Time vid (NSFW, 16+), and the opening credit sequence to an online show!) and am not sure I’ll be able to get another comic strip done while that’s going on. I’ll be sure to post to my social feeds if I can squeeze one in, though. Been loving writing and drawing these strips and reconnecting with you readers again!

Hey, BOTpeeps! I’m excited to tell you that NEW JEFbot STRIPS ARE COMING! Which means I can finally – FINALLY!!! – move ‘bot and Mu out of webcomic limbo and back on the road to fulfill their quests! I took down the latest Christmas Bat tale, The Peppermint Elf, from the site so new readers can jump right into these new strips and go back through The Archive without being confused, so if you were wondering about the disappearance: that’s why. I’ll put it back up after I’ve published more regular strips.

As always, I’m sending a big THANK YOU to the readers that have stuck with me for so long to see a continuation to this storyline! I’m constantly getting feedback both at conventions and online from people asking when new “Prime” strips will be back so it feels good to actually be writing and drawing the strip again. I can’t really say what the schedule’s going to be for future comics as I’ll be doing them during my free time between jobs – and it just so happens I have some time at the moment – but I’m going to TRY and get one out every other week or so (possibly more than that, but that seems like a manageable schedule), as long as I don’t get swamped with other projects. In any event, expect a comic sometime this week! I’m shooting for Tuesday or Wednesday at the moment, so keep an eye out.

While you wait, here’s some artwork I’ve been sharing on the social sites, recently. (Check out my Twitter/jefbot, Instagram/shootzee and Tumblr/jefbot feeds for more.) I’ll also try to publish an update to the BOTology to get new readers caught up and give longtime readers a refresher on the story. See you back here soon, and HOLD ONTO YOUR BUTTS! It’s gonna be a wild ride.

(UPDATE: BOTSALE’s OVER! Thanks to those that used the discount!)

Hey all! First off, yep, I’m still alive and kicking! Sorry for taking such a loOOoooong break from the site. I know it’s been almost a year since my last update and that just sucks. As a mea culpa for the absence, , so if you’ve ever wanted a JEFbot book or JEFbot tee (reminder: Valentine’s Day is right around the corner!) but were waiting for the right time to pick one up: now’s the time! You’ll also be helping me clear out some inventory to make way for some new merch in the future, so it’s win-win!

So as for what I’ve been up to the past year: longtime readers will know that I’ve been working to get into the animation industry since losing my office job a couple years back. Well, sometime around September of last year, I made my first steps into doing just that. I was contracted to do 7 cartoon shorts for an Internet variety show called Rooster Teeth Entertainment System. It was an exciting, stressful, hectic and fun experience all rolled into one, big, crazy learning experience. It was hosted by a funny, talented guy named Colton Dunn, who you can see all over the place these days (NBC’s Superstore, Lazer Team, Steven Universe and more) and had great guests, including IGN’s Naomi Kyle, Kinda Funny’s Greg Miller and Rooster Teeth’s Burnie Burns, among others. The show allowed me to produce and animate cartoons, go to live shows and watch a bunch of amazing actors, musicians and artists do their thing. It was all super cool and I totally miss working on the show. Hopefully I’ll have a chance to work with all those people again in the near future.

In addition to the animated stuff, I was working as a storyboard artist and doing motion graphics for a variety of companies, most notably at CollegeHumor, which was another exciting and fun place to work. Not sure if I can post any of that stuff – I’ll look into it and see if it’s cool. I had a job where I literally drew hundreds of kittens for a couple weeks and I’d love to show some of that to you.

As for the present and future, I’ll be looking to get more gigs drawing and animating, and working my way into a place where I can pitch some cartoons, including one based on JEFbot (!), eventually. I should also have some time to finally finish up the latest Christmas Bat and hopefully get back to the forever-paused adventure Musashi and jefbot are still on! I hate to make promises as I’m currently working on pitches and also don’t know when the next paying gig will pop up and consume my life but I will try to be more active here as I miss the comic and talking with you all. I’d love to get back to that, and I’ll do my best to make it happen, especially since I’m not doing many conventions these days (although I’m still scheduled for the San Diego Comic-Con this July, so hope to see some of you there!) due to my random schedule.

To wrap this long blog post up, let me give a BIG THANK YOU AND HUG to all of you BOTpeeps who continue to check out this site, even when things seem stagnant and dire. You guys are the ones who make me want to keep writing and drawing more JEFbot adventures and I can’t thank you enough. Hopefully I’ll have a new strip up in the next week or two, but in the meantime, enjoy the BOTSALE and I’ll be talking to you soon!

NO ECCC + JEFBOT THIS YEAR

I’m saddened and disappointed to tell you all that I won’t be at the Emerald City Comicon this year. ECCC was the first major convention I set the BOTbooth up at and the convention and people there hold a very special place in my heart. I love Seattle and the trip up is always one of the highlights of my driving adventures during the year – the view going up is spectacular and stopping in Portland has become a tradition.

With that said, it’s with a heavy heart that I had to cancel my booth at the last minute – but for good reason! Turns out I booked a small job this past weekend with College Humor that I couldn’t turn down, and it has continued on into this week. I also have another job interview this Friday that popped up that I need to be in L.A. for. Many of you who have been visiting this site over the past couple of years know that I’ve been looking for a steady job for a long time now (paying rent is important!), and so I just couldn’t turn these opportunities down, as much as I wanted to be at ECCC this weekend.

So to sum up: huge, heartfelt apologies to the BOTpeeps who came by the BOTbooth only to find, well, I’m not sure who or what’s in that space now. (If you go to the convention, let me know!) I’ll miss seeing all your awesome faces and getting to hang with you at one of the best comicons around. Wish me luck that I’ll book a job soon, and I hope to be back at Emerald City with hugs and fist-bumps for you next year! (Oh, and for the record, I still plan on being at the San Diego Comic-Con in July if all goes according to plan. Fingers crossed!)

SALE’S OVER! HOPE YOU ALL HAD A GREAT VALENTINE’S DAY! 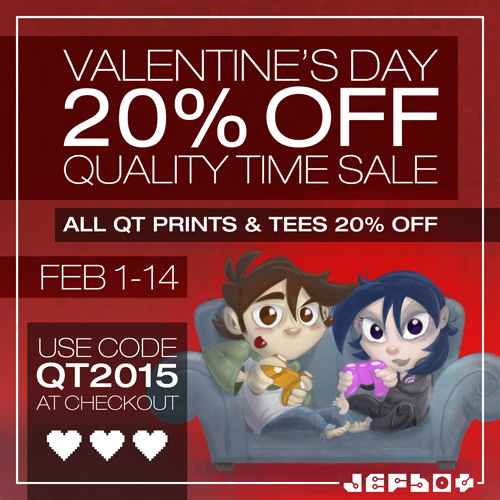 Hey, BOTpeeps! I’m having a sale on Quality Time merch from now ’til February 14th at The BOTshop, so if you’ve been wondering what to get your sweetie for Valentine’s Day (it’s almost here!) head on over and check it out. I just put up the new, sky blue-on-navy QT tee that was previously only available at comic-cons and was able to restock a couple sizes of the 1st and 2nd gen tees, too, but some sizes are already gone.

Make sure you put in the code: QT2015 at checkout to get a 20% discount on any Quality Time merch you have in your cart. (See example to the left.) Also, I’ll be shipping orders out as soon as I get ’em, so the sooner you order, the better the chances you’ll get your stuff before Valentine’s Day (Feb 14th!)

Thanks for your support and have an awesome Valentine’s Day regardless of your relationship status! – Jeff

BOTpeeps! I’m doing the Salt Lake Comic Con this week, so if you’re anywhere near SLC and plan to come to the con, swing on by the BOTbooth and say hi. Since I still haven’t been able to get back to JEFbot, doing these conventions and meeting you readers really helps keep me feel connected to the comic and to you all. I miss doing the comic a TON, and I’m hoping to get back to it as soon as I’m able. Unfortunately, I still haven’t found a steady job, but I’m doing a bunch of odd projects here and there which help pay the bills (somewhat) so I’m still keeping my head above water (mostly.) I’ll have to make a long, detailed blog about what I’ve been up to recently after I get back from Utah. Anyway, thanks for coming and checking in on me and the comic! I sincerely hope to have good news, soon.

Here are the details. And, as always, I’m giving special con BOTtons to BOTpeeps while supplies last, so make sure to let me know you’re a reader!